So, my thought for today.....don't leave your sample book, or any part of your book for that matter, alone in the company of a crazy cat and a goofy Pug!

I just came home after meeting with my merchandise contact to find my sample book being held hostage by my pets.  Literally, the book was in the middle of the floor, and it was as if their biggest show down was about to ensue.

In one corner....Oscar the cat Dela Hoya-- In the other corner....Sampson the scrap eating Pug.

Oscar: Hmmmmm, what's this on her desk?  Ahhhh, it looks important.  Wait, this face looks all too familiar.  I must have it!  If I jump on the desk and nudge it off with the side of my face I can ensure it hits the ground, allowing me to make it my newest toy!  Muahh haha Muahh haha!
Sampson: Oh boy (tail curls up), what does Oscar have?  Is it food? Is it a treat?  I'll go over and see!  Dumpt de dumpt.
Oscar: I finally achieve my goal for the morning and here he comes to stifle my plan.  I can't get any alone time in this house!
Sampson: Nope, not food (tail straightens out).  Hey, that toy has my face on it.  Dumpt de dumpt.
Oscar:  This toy represents the fruits of my labor.  Back off funny man!
Sampson:   Funny man? I am funny---funny looking.  You shouldn't take yourself so seriously my dear brother.  That toy looks like me anyway.  It's my turn to play.
Oscar: Bring it on!
Sampson: I'm trying to bring it, I just don't move as quickly as you do.  Dumpt de dumpt.

It was right about then I walked in to find this hilarious situation taking place over the book cover. Maybe it was the picture of Chloey the Pug on the cover that appealed to them, or maybe this is just what happens when we leave the house.  I was able to re-cover the book safely, and now both boys are napping in their respective corners :) 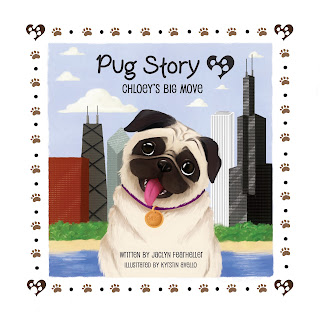 Posted by How to Self Publish Your Project at 10:05 AM No comments:

Your storyline: See the end from the beginning!

Let's re-visit developing your storyline: See the end from the beginning.  In other words, know what the endgame is for your book. You can then essentially "back in" the story as opposed to the reverse; hitting it head-on and running the risk of it being inconsistent upon it's completion.  Kind of like even though a building begins on it's foundation, the architects have completed blueprints long before ground breaks so as not to compromise their endgame.  For me, I decided that I wanted the main character in my first children's book to ultimately adapt to her new surroundings and overcome adversity as a way to help teach children how to achieve the same experience. This set the stage for my storyline, even though I hadn't started writing yet.  I knew where the storyline was headed and where my characters would stand at the end.

Think about your storyline having three major points of contact.  A gripping beginning, a climactic middle, and a satisfying ending that still leaves the reader wanting more. Each third should propel the reader to the next.  Introduce the back story and capture the reader with a gripping beginning upon which you can build. Think again of the building and how each layer must build on the following one until the project is complete.

Your spy novel might begin by introducing the main character who is a robber that pulls off a bank heist. This will help the reader connect to the main character quickly, and give you the gripping beginning you need.  Your climactic middle might include something like; the robber falls for the woman who opened the bank vault, but she never saw his face even though he saw hers.  Since you have previously decided that your storyline ends with a bank robber who gets caught by a spy agency, you now have all three major points of contact.  Bank gets robbed, robber falls in love with teller, robber gets caught.  However, don't forget to write a satisfying ending to your book, and still leave the reader wanting more. Even though the robber is caught, raise a question and leave it on the table.  Was she in on it with him?  Does he find a way to escape jail?  Does he actually work for the spy agency?

Write your storyline according to what is popular and selling, but also to what you would want to take away from the book if you had not written it, but simply read it.  In my book, "Chloey's Big Move", the main character moves to Chicago and deals with all things new, faces adversity, and finds resolution that ends with her thinking only of Bark Park, her new friends, and all of their adventures to come.  This was the method to my madness which I hope will be of some help to you!


Posted by How to Self Publish Your Project at 3:23 PM No comments:

Thinking about your book's layout

I have chosen to share my thoughts on steps towards writing and self publishing a book, in a way I found helpful to me.  If you have experiences or thoughts to contribute please let me know, as it is all about sharing helpful information.

Thinking about your book's layout: After researching layouts of some favorite books among children (my target audience) I was able see patterns. Regarding how many pages I needed, what sizes sold well, and I decided that I wanted illustrations on every page, along with the text.  My target audience seemed very receptive to the bold colors and fun characters they were seeing during reading hour at Barnes and Noble, or at the libraries I frequented.

Cover art and layout are important to research, as well as deciding what you like relative to getting your book made.  For a children's book knowing some of the details I mentioned just above helped guide me in determining my layout, as well as knowing what I liked from a creators stand point.  "A How To" book may require pictures as well as copy because some people learn visually, and it reinforces the copy already on the page.  A novel or biography may also require pictures of the subjects to correlate with the copy.  This will help the reader truly visualize the subject as you intend during certain parts of your book.

So, just a few things to think about when planning your layout, that will also be helpful when you go to your illustrator/designer or the printing press to finalize details.  Sometimes your copy may need to be slightly adjusted based on changes to the layout for cost efficiencies, and for the success of the book's first run.

I am excited in my next blog to share my thoughts with you about how to find an illustrator, designer, or photographer for your book.


Posted by How to Self Publish Your Project at 7:38 PM No comments:

I wanted to do a check in, as I have been nursing a sick dog and tied up all weekend.  However, he and I are feeling much better and rested!

Please check back later tonight, and read some thoughts on thinking about and planning the layout of your book.  Hopefully you have taken some time and decided on your topic, target audience, and begun to develop your characters, I found that working out the details of the book layout was a pretty imperative step in the planning process.

Have a great day!

JACI
Posted by How to Self Publish Your Project at 10:14 AM No comments: